Forestdale Elementary School opened on September 8, 1964. During our first year, enrollment was approximately 350 students. Forestdale’s first principal was Margaret T. Ford. She left in 1966, and became the elementary supervisor for Area I schools. Ford was succeeded by Ronald E. West, who led our school from 1966 to 1969.

Forestdale Elementary School was designed by the architecture firm of Victor B. Spector and Associates, and was built by the Alcon Construction Company in 1964 at a cost of $509,700. Our building was originally planned to have 16 classrooms, but before construction commenced the Fairfax County School Board approved an increase to 20 classrooms. Our school was designed as a rectangle, with four hallways surrounding a courtyard in the center. The four additional classrooms were constructed in the center of this courtyard, and that is why we have two small courtyards in the middle of our building today.

Construction of Forestdale was scheduled for completion by September 1, 1964, in time for the opening of schools on that date, but the contractor was unable to meet the deadline. Forestdale opened one week later while our building was still under construction. Only 13 of the 20 classrooms were ready for use, and the cafeteria and kitchen were not finished until November.

You might not have noticed her at first, so take a second look at the above class photo and pay close attention to the front row next to the sign. Your eyes aren't deceiving you—that is a Shetland Sheep Dog (also known as a Sheltie). Forestdale alumni from the 1970s would instantly recognize this pooch. Her name was Dutchess, and she belonged to Principal Nancy Calvert. Principal Calvert often brought Dutchess to work with her and let her very intelligent, well-trained dog roam the halls and join classes as long as the children and Dutchess behaved themselves.

When Forestdale first opened, our school was built without a gymnasium. Physical education was taught in an empty classroom or outside through structured play. On rainy or snowy days, games like Crab Soccer were played in the cafeteria. The first addition to Forestdale, consisting of a gymnasium and a music classroom, was constructed in 1987. In 1992, construction began on the first building-wide renewal of Forestdale. 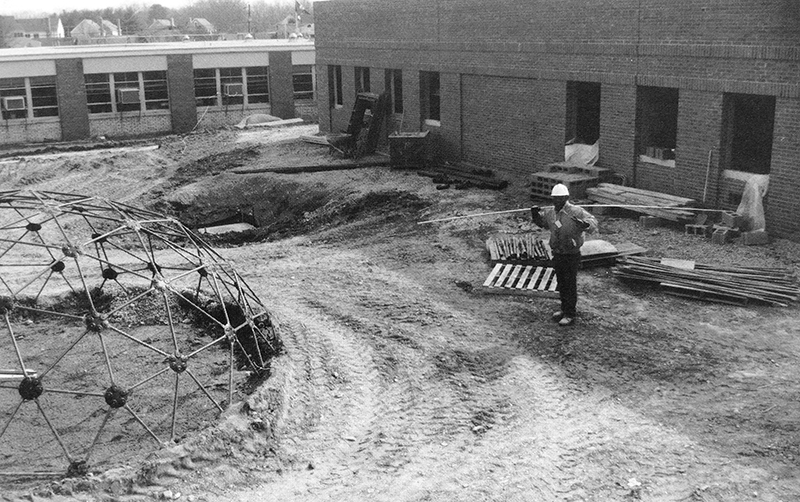 During the renovation, air conditioning was added throughout the building. The library, originally located cattycorner to the main office, was moved to its present location. The main office was expanded outward, and a second music classroom and an art room were added to the gymnasium wing. Two classrooms for the School Age Child Care (SACC) program and three general education classrooms were added to the north side of the building. The modular classrooms behind our school were built in the early 2000s. Watch these changes unfold in this animated series of aerial photographs courtesy of the Fairfax County Park Authority.

Forestdale is a sweet little school, and the best kept secret in Fairfax County. We constantly talk with our children about respect, honesty, fairness and kindness. They use those words all the time. I think that has a lot to do with the atmosphere in our building.
~ Terri Cavender, Principal of Forestdale (1997-06)

Did you know that when Forestdale opened there were no kindergarteners in our school? A kindergarten program was piloted in several schools in 1967 and proved so successful that one year later Fairfax County Public Schools (FCPS) implemented kindergarten county-wide. FCPS enrolled approximately 8,000 children in kindergarten in September 1968. In 1990, a pre-school program was started at Forestdale. The program remained in place until 2003 when it was moved to the newly opened Island Creek Elementary School.

Jean Erickson, for whom our library is named, was the very first librarian at Forestdale. Following her retirement in June 1990, the Fairfax County School Board officially named our library in her honor. Mrs. Erickson is fondly remembered by Forestdale alumni. She would have story time in the library, and the children would sit in rapt attention as she read such classics as Madeline and Charlie and the Chocolate Factory. Mrs. Erickson knew the stories so well she could read the books without looking at the words. Her unique gift of storytelling instilled the love of reading in countless Forestdale students.

Mrs. Erickson is also fondly remembered for giving freely of her time and talents to students, school staff, and the community alike. Her expertise, innovative spirit, high degree of professional commitment, enthusiasm, and sheer love of learning significantly influenced the lives of all those who knew her. Jean Erickson passed away in December 2016.

What’s in a Name?

Forestdale Elementary School was built on land that was once part of Oak Grove, a historic property owned by the Broders family. Learn more about the history of our area and the origin of the name Forestdale in this video produced for Fairfax County Public Schools’ cable television channel Red Apple 21.

The construction of Springfield Mall in the early 1970s was of tremendous interest to Forestdale students. Through their classroom windows, students could see the heavy construction machinery moving dirt and gravel through a haze of dust, and watched as the steel framework of the building took shape. One former student admits to pretending to complete her school work while actually watching the construction instead. After the mall was completed, Forestdale’s physical education teacher instructed students to “Run to Montgomery Wards!” meaning they had to run across the field behind our school and not stop until they reached the fence along Frontier Drive.

Melissa Belote, a former competitive swimmer, represented the United States in the 1972 Summer Olympics in Munich, Germany. She brought home three gold medals and set a new world record in the women’s 200-meter backstroke. Belote grew up in Springfield and attended LHS. In the fall of 1972, she visited Forestdale Elementary for an assembly and the students were given an opportunity to touch her medals.